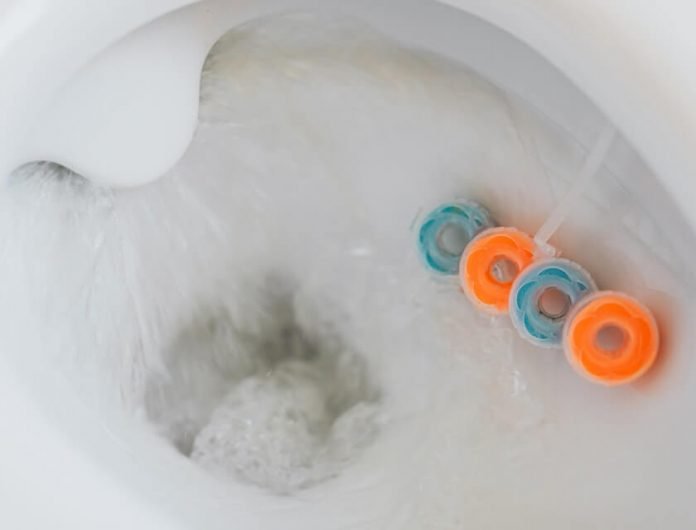 Will a Toilet Eventually Unclog Itself?

Dealing with clogged toilets is simply a fact of life. It does in no way reflect how often you clean your toilet, and may have more to do with the plumbing in your home, and the things you flush on a regular basis.

When a toilet does get clogged, one of the first questions that will pop into your mind is “will it eventually unclog itself”, or do you need to take concrete action and when?

Will a Toilet Eventually Unclog Itself?

Yes, a clogged toilet will usually unclog itself given enough time, provided that the clog is caused by water-soluble items. However, if an item that won’t dissolve in water is the cause of the clog, the pipes will need to be cleared.

The main question to answer is what the cause of the clog is. If it’s an organic, dissolvable material that is meant to be flushed, your toilet will unclog itself.

However, if you have flushed any of the items that should not be flushed, your septic system has been backed up to a much greater extent, and you will need to take action.

Non-flushable items that we commonly throw into the toilet include tampons and pads, condoms, cat litter and cat poop, paper towels, baby wipes and even hair. If they are the cause of your clog, you need to grab a plunger, a plumber’s snake, or even call in for help.

You should also consider how large the clog is. If the water rises too high in the toilet bowl, but drains away slowly, the clog is a partial one, and it may resolve itself. Give it about an hour before you flush the toilet again, and it should be fine.

If no water is draining from the toilet, it is unlikely the issue will go away on its own. In this case, it’s better to do something about it as soon as possible.

Do note that if you have waited for over three hours, and the clog is still there, it is highly unlikely it will resolve itself. It will also start to smell and bacteria will start to multiply, so you will need to get to the business of unclogging.

Bear in mind that pressure alone may not be enough to rid you of the problem, and it may only move the clog further down the pipe where it will be even harder to reach. If your toilet is completely clogged and flushing or using a plunger does not work, call a plumber.

Whether or not a clog resolves itself will also depend on the type of toilet you have. Some models have large traps that practically guarantee there will be no clogs in your drain. At least, not at toilet level.

Toilets with smaller traps may have a harder time passing water, and they will rarely unclog themselves.

Clogs caused by water-soluble materials have a chance of clearing themselves. This includes poop and toilet paper, and not much else. Clogs caused by materials that will not dissolve in water will rarely clear up on their own.

Most clogs are actually caused by items that shouldn’t be flushed in the first place, as they don’t dissolve in water. This includes fats, oils and starches from foods, baby wipes and other products that claim to be “flushable”, but that actually won’t dissolve in water nearly as fast enough.

Consider your flushing habits before you decide to wait for a clog to clear itself. If it’s just human waste and toilet paper going down your drain, you can hope for the clog to go away on its own. If not, some help will be required.

Will Poop Eventually Dissolve in a Clogged Toilet?

Yes, poop will practically always dissolve, as it is water-soluble, so it will break down in water over time.

On average, it will take about an hour for a clog caused by poop to dissolve, so put the toilet seat lid down, and give it some time to dissolve before flushing again.

Will Toilet Paper Unclog Itself?

Yes, toilet paper will unclog itself, as it is soluble in water. If you’ve flushed too much toilet paper, give it an hour or two to dissolve before flushing again.

Bear in mind though that the toilet paper rolls that are often advertised as flushable aren’t actually made of the same material as toilet paper, and that they will take a longer time to dissolve. Ideally, you still want to throw them in the trash, despite the catchy commercial.

How Long Does It Take for Toilets to Unclog Themselves?

Toilets clogged by poop or toilet paper should unclog themselves within an hour. However, if you have flushed a non-flushable item (basically everything other than the two), your toilet can take a couple of days to unclog, and may not unclog at all.

If your toilet has been clogged by an excess of toilet paper (or poop), you can wait for an hour until it dissolves before flushing again. If there is a severe blockage further down your pipes though, you may still not be able to get the water to flow as it should.

Also, bear in mind that waiting a long time for the toilet to unclog itself will lead to quite the unpleasant smell, and all kinds of bacteria will start to multiply in your toilet bowl.

Wait no more than an hour, and disinfect the toilet thoroughly after you have flushed it.

Is It OK to Leave a Toilet Clogged Overnight?

Leaving a toilet clogged overnight is not the best idea. If it has not resolved itself in a couple of hours (no more than 3), chances are you will need to do the unclogging.

While your toilet will likely not start to smell unless there is poop in the bowl too, you are still risking it overflowing, or even backing up your other water outlets.

Calling a plumber in the evening is certainly costlier, but it’s better to handle the clog sooner rather than later, as it could turn into a more complex problem if you leave it overnight, only to discover it’s not caused by a water-soluble item.

How to Prevent Your Toilet from Overflowing When It’s Clogged

A clogged toilet is likely to overflow, but here is what you can do to prevent that.

First, never flush a clogged toilet, even if some of the water is still draining.

Then, prevent the toilet tank from refilling. The simplest way to do this is to turn off the toilet water valve, usually located right next to the tank itself.

If you don’t have one or if it’s hard to reach, you can open the toilet tank and raise the float. The float is the ball-shaped thing inside the tank that controls the water level. All you have to do is raise it and secure it above water level. You can place something underneath it to keep it in place.

You can of course also turn off your home’s main water supply, if you have access to it, but this will mean no water anywhere in the house, so try locating that toilet valve, and work on fixing the clog.

Can You Unclog a Toilet Without a Plunger?

If you don’t have a plunger, here is what you can use to unclog your toilet:

While a toilet brush won’t work as well as a plunger, you can still use it to drive water down the toilet and dislodge a clog that is actually in the toilet itself. However, note that this will not work if the clog is further down the pipes.

A plumbing snake will get rid of most clogs, so you can use it to break up anything that is packed up in your toilet. If you don’t have one, you can also unfold a clothes hanger and stick it into the toilet drain.

Make sure to use the plastic end of the hanger though, as using a wire could damage the toilet bowl.

What Can You Pour Down a Toilet to Unclog It?

You can try pouring some dish soap, hot water or baking soda and vinegar down the toilet to unclog it.

Dish soap is slippery and will lubricate your clogged pipes. Just pour around half a cup into the toilet and wait 30-ish minutes before trying to flush again. Note that you shouldn’t try this with a completely clogged toilet.

You can also mix a cup of baking soda and two cups of white vinegar and pour it down the toilet bowl. It will start fizzing and can move a clog, if you let it work for 30 minutes.

You can try pouring some hot water (not boiling, as it may crack the bowl!) down the toilet to unclog it too. Drain unblockers may work as well.

If none of these methods are working, call a plumber.

Why You Shouldn’t Wait to Handle a Clog

Waiting a couple of hours to deal with a clogged toilet shouldn’t cause any issues. However, waiting longer than that, or even leaving a clog overnight could cause further headaches.

If your toilet tank is leaking, you may find the bowl has overflowed while you were waiting for it to unclog itself.

If there is poop in the clogged toilet, the bacteria from it will start to multiply all over your toilet bowl. If the toilet also overflows, you will be spreading them all over your home.

There’s also the smell of standing water to consider, especially since there is probably pee or poop in it.

Rather than wait to get rid of a clogged toilet, tackle the issue as soon as you can. The only case in which you can reasonably wait is when you are absolutely certain you have not been flushing unflushables down the toilet, but have now filled it with too much toilet paper or poop.

While toilets may unclog themselves when clogged with water-soluble materials, most other clogs will not resolve themselves on their own. Call a plumber just in case.

Can You Use Ceiling Paint On Walls?