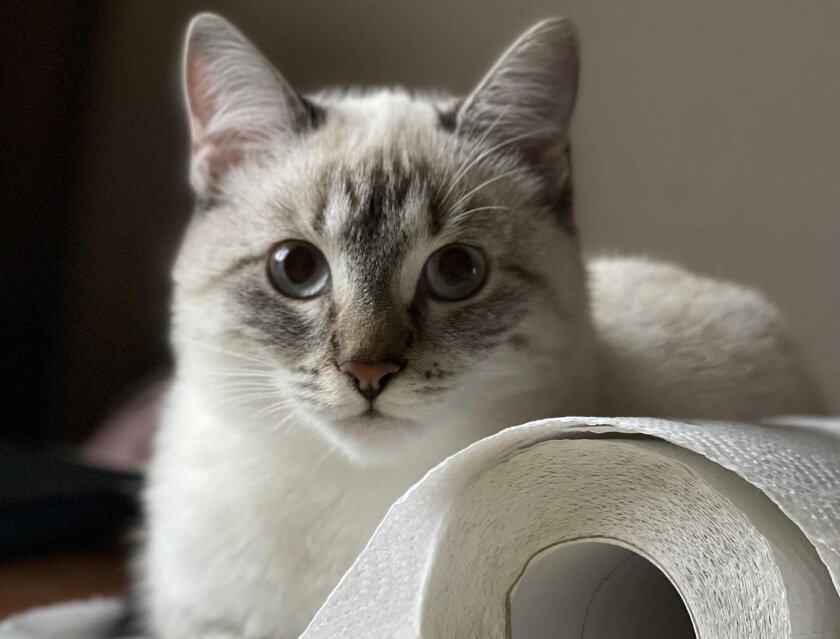 If you have a cat, you are very familiar with the endless routine of cleaning out the litter box. The question that naturally arises is where do you dispose of it after you have scooped it out? Do you flush it down the toilet? Do you separate the litter from the poop and dispose of them differently?

Much like pet hair, cat litter is a fact of cat owner life. Here’s how to dispose of it correctly:

No, you shouldn’t be flushing cat litter down the toilet. It can damage your plumbing and clog your pipes, as well as damage your septic system. It can also release a parasite called Toxoplasma gondii into the environment, which is harmful to both humans and animals.

Cat litter, especially the clumping kind, can form clogs in your plumbing that will be difficult to get rid of without the help of a plumber.

When it enters your septic system, it can compromise the delicate balance of microbes it already contains. As cat poo may also contain Toxoplasma gondii, flushing cat litter can also be an environmental hazard.

Toxoplasmosis is especially dangerous to pregnant women and those with a weak immune system. Since wastewater treatment plants aren’t designed to handle animal waste, they won’t remove the parasite from the water, and it can be introduced into your local waterways. There, it can harm fish, otters and other marine life, as well as the humans who come into contact with the contaminated water.

What Happens If Cat Litter Goes Down the Drain?

When cat litter goes down the drain, it can block your pipes and cause a complete blockage. Even if it does eventually completely dissolve, it will still put undue strain on your septic system, and can introduce the dangerous Toxoplasma gondii parasite into the environment.

Kitty litter that contains clay is especially bad for your pipes, as the moisture can cause it to expand, ultimately blocking your drain entirely. This will mean a hefty plumbing bill and a lot of stress.

Clumping litter is just as bad, but even the non-clumping kind can turn into a clog that you won’t be able to shift yourself.

If your toilet is eco-friendly and has low flush power, it may not be able to carry the litter and poop all the way down the system, which can lead to a blockage in a very difficult to reach place. This will require the help of a plumber once again.

Some cat’s poop is also home to the Toxoplasma gondii parasite, which will be introduced into the environment when you flush cat litter. In order not to endanger the lives of other humans and animals, dispose of your cat’s poop in a safer, eco-friendly manner.

What Kind of Cat Litter Can Be Flushed?

You can flush cat litter that is made of wheat, corn, tofu or shredded paper. Some types of litter made of wood remains are also flushable.

The best way to tell if the litter you are using is actually flushable is to read the label carefully. A lot of brands will claim to be flushable, but still contain ingredients that are not meant to end up in the sewer system, so do a bit of your own research.

Also bear in mind that the only things you can actually safely flush are human poop, pee and toilet paper. Other items are not flushable, even when they appear insignificant and small enough to safely travel down your pipes.

While designed to be disposed of in the toilet, flushable cat litter isn’t always flushable and can put a strain on your septic system, as some of the solids may take a long time to break down in your pipes.

Even if the flushable cat litter does its job as intended and safely travels to the waste processing plant in your area, you may still be introducing the Toxoplasma gondii parasite into the waterways.

Separating your cat’s poop from the litter can help you avoid this, but it will make cleaning out the litter box a much longer process, and you can never actually be sure you’ve got it all. Plus, even the flushable kind of litter can cause a clog in an otherwise blocked toilet.

Does Cat Litter Dissolve in Water?

No, cat litter does not dissolve in water, as it was designed to be absorbent. This is especially true of the clumping types of litter, or the ones made with clay.

Some types of cat litter may eventually break down in your pipes, but they can in the meantime cause a significant blockage that you will have a hard time shifting.

How Do You Dissolve Cat Litter in a Toilet?

If your toilet has been clogged by cat litter, you can try pouring some dishwashing soap into the toilet and plunging it. Vinegar and baking soda left in the bowl overnight may also help, as can using a plumbing snake.

If the cat litter won’t go down the toilet, try using a plunger to move it. If it doesn’t work, you can add a bit of dishwashing liquid to the bowl and let it sit for a few minutes before plunging again.

A combination of two cups white vinegar and two tablespoons of baking soda left in the toilet overnight can also help solve the issue, as can using a drain unblocker.

If all else fails, you can try breaking the blockage with a plumbing snake. If your toilet water is also brown, there may be a serious clog in your pipes somewhere, and you may need to call a plumber to assess the extent of the damage.

How Do I Dispose of Cat Litter?

The best way to dispose of cat litter is to scoop it into a trash bag and throw it in the bin. Sift it with a litter scoop, and tie the bag off to prevent fallout and keep the smell contained.

You can also designate a specific garbage bin for the kitty litter. To keep it from smelling, place a bit of baking soda or coffee beans at the bottom. You can also add a bit of unused litter, as it will absorb a lot of the smell. Take this trash out every day.

What is the Most Environmentally-Friendly Way to Dispose of Cat Litter?

The most eco-friendly way to dispose of cat litter is to scoop the clumps and poop into a biodegradable bag and throw it in the trash. The unused parts can then be composted, depending on the material they were made of.

Be careful not to compost litter that may contain traces of cat waste if you plan on using the compost as vegetable fertiliser. If the litter was made of wood, grass, tofu, corn, wheat or recycled newspaper, it is safe to compost.

Can You Flush Cat Poop?

No, you shouldn’t be flushing cat poop with or without the litter. It can clog your pipes, damage your sewer system, and infect the environment with the Toxoplasma gondii parasite that is harmful to both animals and humans.

Even if you were to carefully separate your litter from your cat’s poop, flushing it is still the worst thing you can do. While it is much less likely to clog your pipes, it will still introduce bacteria to the sewer system that it wasn’t equipped to treat.

Some cat’s poop may also contain the Toxoplasma gondii parasite, and you definitely don’t want it to infect your local environment, as it is both dangerous to marine animals and to humans.

How Do You Dispose of Cat Poop?

After you have scooped out your cat’s poop from the litter box, place it in a biodegradable bag and throw it in the trash can. You can also double bag in order to minimise the smell, and take it to an outdoor garbage bag.

Even though the toilet is likely nearer than the trash can, the proper way to get rid of cat poop is to bag it and bin in.

Just like paper towels and hair, cat litter and poop shouldn’t be flushed. Dispose of them in the garbage instead, and keep both your pipes free from blockages, and your environment safe.

Why Are Blinds So Expensive?

11 Toasters that Turn Every Morning into a Good One

Table Top Dishwashers for Those Who Hate Washing Up

How to Iron Without an Iron