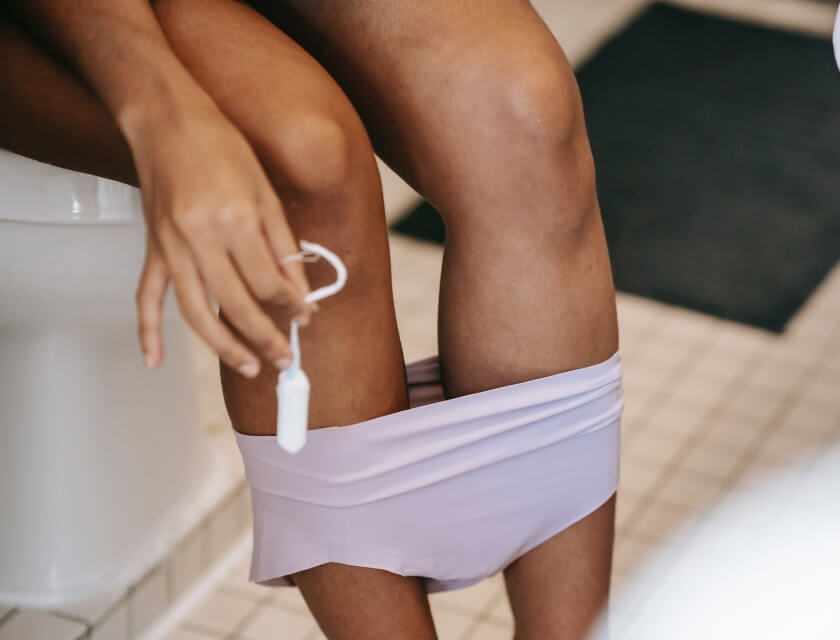 Every woman has probably experienced the same gut-wrenching feeling that comes with having to dispose of a tampon at someone else’s house. However, since this feeling of shame (despite the fact that periods are such a common and natural occurrence – after all, half of the world’s population has them, and the other half has to listen to the first half complaining about them) certainly trumps potential toxic shock syndrome, we grit our teeth and brave the situation.

Over 50% of women will take the easier course of action, and simply flush their used tampon down the toilet. Is this the right thing to do though? Wouldn’t it be better for the environment (not to mention our plumbing) to bin it?

No, tampons can’t be flushed down the toilet. They will not break down and will quickly absorb large quantities of water, which will make them expand. In turn, these enlarged tampons can block your drains.

The no flushing rule applies to both homes that have their own septic tank, and homes that are connected to the local septic system.

Even if your used tampon manages to make it through the entire length of said piping, it will end up in the ecosystem, where it will spend the next 500 years breaking down bit by tiny bit.

The only things you should ever flush down the toilet are the three Ps: pee, poo and paper (toilet paper, that is). Other things shouldn’t be flushed.

Can You Flush Biodegradable Tampons?

No, you can’t flush biodegradable tampons either, as they can take as long as 6 months to decompose, which is not something plumbing systems can handle.

Just like regular tampons, they will accumulate in the piping over time, and can lead to blockages that will cause your toilet to overflow.

In fact, no tampons are certified flushable, as the UK’s Fine to Flush Guidelines require them to break down and pass a 5.6 millimetre sieve in 6 hours – which none of them can do at the moment.

Can You Flush Tampon Applicators Down the Toilet?

No, tampon applicators should not be flushed down the toilet, even when the manufacturer says they are degradable or flushable. This goes for both cardboard applicators, and especially plastic ones.

A cardboard applicator can end up clogging your pipes, while a plastic applicator will get stuck somewhere en route to the ocean more likely than not. Or will wash up on a beach somewhere, or be mistaken for a snack by an unsuspecting marine animal.

What Happens if You Flush a Tampon?

When you flush a tampon, it will absorb water and swell, which can cause it to clog your pipes. The tampon will ultimately end up in the ecosystem where it will need the next 500+ years to completely break down.

It is estimated that around 1.4 billion tampons are flushed in the UK every year. This behaviour ends up costing homeowners £88 million in unnecessary plumbing expenses.

All of these tampons ultimately massively contribute to global pollution, and will contaminate rivers, oceans and every unsuspecting animal that comes into contact with them.

Is It Okay to Flush a Tampon Once?

Honestly, no. You shouldn’t be flushing any tampons. If you’ve accidentally managed to drop yours into the toilet, the proper and eco-friendly thing to do is to fish it out.

Wear gloves while removing the tampon from your toilet, and then throw it into a biodegradable bag (a dog poop bag, for example) and bin it.

If you absolutely can’t bear the thought of fishing a used tampon out of the toilet: you probably won’t clog your pipes, but do try to be careful when you next remove one.

How Long Does It Take for Tampons to Clog a Toilet?

There is no specific amount of time that tampons will require to clog a toilet. It will mostly depend on the size of your pipes, the amount of waste you flush on a regular basis, and how clogged the plumbing already is.

Most drains are rather tight, so if a flushed tampon hits a partial blockage, it will likely get stuck and cause a major issue you will need to call a plumber in to fix.

How to Dispose of Used Tampons?

The correct way to dispose of a tampon is to wrap it in toilet paper and throw it in the trash.

If there is no toilet paper on hand, you can also use a tissue or a paper towel. You can also purchase small bags that are made specifically for wrapping tampons and pads, if you want to save your household (or anyone who uses a public toilet after you) the sight of blood. Dog poop bags can also work just as well in a pinch.

Periods are nothing to be ashamed of, and will hopefully finally be normalised in the next decade. While we are waiting for feminine hygiene products to become available to every woman who needs them, let’s teach our girls not to flush their tampons: it can literally save the planet.

How to Keep Towels Soft

How to Save Time When Cleaning and Maintain a Spotless Home

Can I Put a Washing Machine on Top of a Dryer?

How Often Should You Wash Each Item of Clothing?

How Long to Wait Between Coats of Paint?