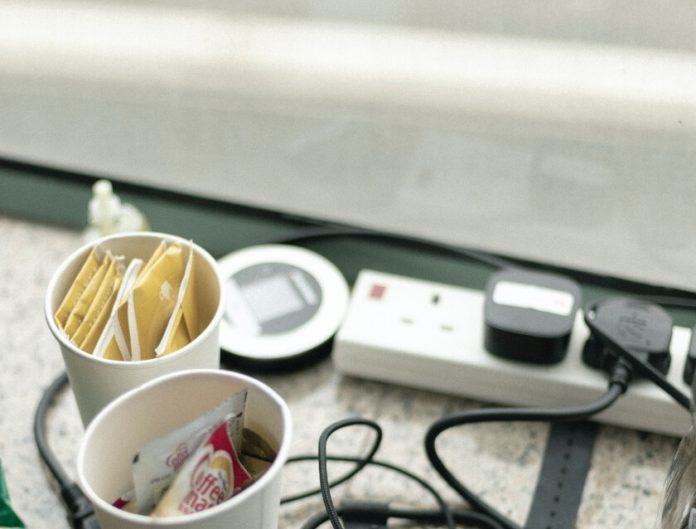 Don’t plug an extension cord into another extension cord. It poses a major fire hazard, as you can inadvertently overload them and cause them to overheat.

Were you to plug two extension cords together, nothing would happen immediately. The appliance you used them for would appear to be working just fine. However, over time, the less-than-perfect electricity would damage both the extension cords and the appliance. Not only do you risk burning your house down or electrocuting yourself, you may be facing some costly repairs as well.

How Many Extension Cords Can You Connect Together?

You shouldn’t connect any number extension cords together. While it will certainly give you extra length, the voltage drop can quickly lead to overheating and pose a serious fire hazard.

When you connect two extension cords, their current capacity is reduced in half. This will lead to a voltage drop and will at some point cause them to overheat, especially if you keep them plugged into each other 24/7.

Your best option is either to invest in a longer extension cord, or to bring an electrician in to hook you up with a new set of outlets.

Can You Plug Two Extension Cords Into One Outlet?

You can plug two extension cords into one outlet. You do risk overloading it though, so make sure to consider which appliances you will be plugging into it too.

Ideally, you want to be very careful about the electricity you demand from each outlet, and from each extension cord. Before placing an appliance in a room, consider where you will plug it in. You may need to rejig your current setup.

Extension cords don’t have high resistance to begin with. When you plug two of them together, it will drop even further. This means that they won’t be able to pass the proper current down to the end of the line. This will over time damage whatever you’ve plugged into them.

If your extension cords suddenly lose power for whatever reason (for example, they are not plugged together well), they may damage the appliance you have plugged into them. Over time, as they are tasked with more than they can accomplish, one of them may suddenly fail as well.

Extension cords need to be very well insulated. When you plug two of them together, the current they need to transport may start to damage this insulation, which can lead to a fire. Essentially, when you ask an extension cord to do more than it was built for, you risk damaging it.

Two extension cords plugged together will at some point start to overheat. This will happen near the outlet, and you may start to feel the plastic getting increasingly hot to the touch.

If your extension cord is anything but cool, unplug it immediately and stop using it until you identify what the issue is. A wire may have come loose, or you may have damaged the entire cord by using it in an inappropriate way.

When you plug two extension cords together, the cord may fray or get otherwise damaged and come loose. This may result in some sparking, which can cause an electrical fire which is very hard to control.

Why Is It Dangerous to Plug Two Extension Cords Together?

The dangers posed by plugging two extension cords plugged together include:

When you plug two extension cords together, the one connected to the main outlet will potentially be overloaded. This will cause the cord to overheat, and can cause a spark that will ignite whatever it lands on.

An overloaded extension cord also poses an electrocution risk. Should anything go wrong with the cord or its insulation, and you were to reach down to unplug it, you may get an electrical shock.

The primary extension cord which you have connected to the outlet will never draw more than its voltage capacity, which will reduce the voltage that gets to the second extension cord. The further down the line you go, the likelier and higher the drop.

The voltage drops and poor electricity quality can damage the appliance you have plugged into these extension cords. This can either lead to a costly repair, or make you purchase an entirely new appliance.

How to Avoid Plugging Two Extension Cords Together

Ideally, you want to plug most of your appliances into wall outlets. If this is not possible, always use a single, high-quality extension cord for them. Here is what you can do instead of plugging two extension cords together:

Extension cords can have up to six outlets. Get one of these as opposed to one that one has two or three. You still need to consider the total power demand you are making on this extension cord though!

Having more outlets in your home is always a good idea. Ask your local electrical to come and fix them up for you. Consider not just your current electrical needs, but what you foresee they might be in the future as well, to save yourself the double renovation.

Not all of your appliances need to be plugged in all the time. The fridge and the boiler certainly do, as does the TV in most cases, but the microwave, the toaster and even the AC can be unplugged when not in use. This will give you some extra outlets to work with.

Never plug two extension cords together, as they can result in an electrical fire and cause other damage to your appliances.

What Are the 3 Compartments in a Washing Machine?